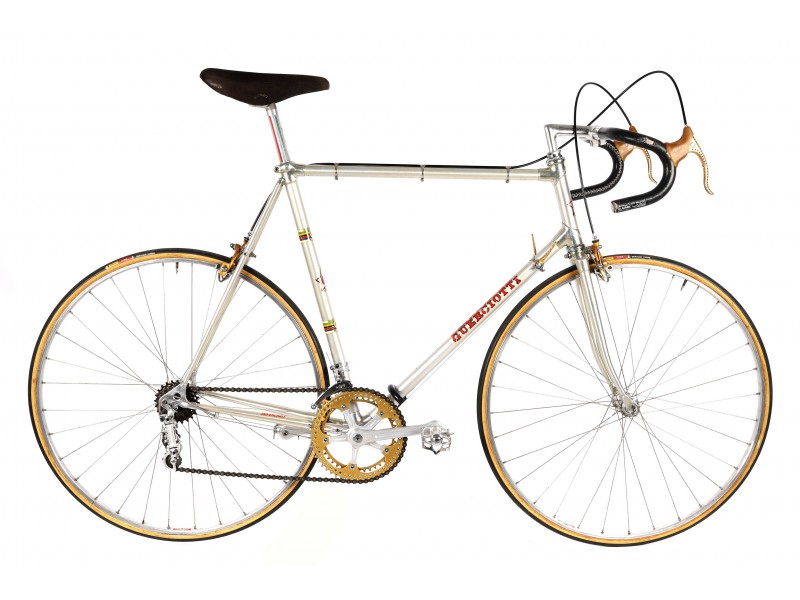 What is DRILLIUM? Refers to the process of milling and drilling metal parts of bicycle components. In the 60s and 70s this trend appeared among the riders by slimming some parts of their bikes from unnecessary grams. Drillium is the phrase describing bicycle parts that have been modified by drilling holes in them to reduce weight and give personality. What was originally a way to save a few grams at the expense of durability, has become a form of artistic expression.

Like many other successful bike companies (e.g. Colnago) Guerciotti tried to work with different materials than just steel and started with aluminium. Though the metal itself was promising, when it came to frame building, the processing of the material was rather difficult. So almost every Italian company which sold aluminium bikes in the 1970s and early 1980s relied on the expertise of the company Alan.
In the 1970s, when aluminium frames were still something new and mostly poorly made, Alan started its business with high class aluminium road bikes and cyclocross bikes. They were one of the first manufacturers who were able to build aluminium road bikes in a light reliable structure. Their frames were made from very durable aluminium alloy tubes, which are connected together by screwed and glued lugs. Many championships proved their quality.
Our Guerciotti Super Record Classic Road Bike from the 1980s is built around one of those frames made by Alan. But it would not be a Guerciotti wasn't it equipped with absolute top class and pantographed parts.
In this case the frame is complimented by the best groupset of its time - a Campagnolo Super Record gruppo. The precise and beautiful Detailing on the parts Guerciotti pantographs are found on the seatpost and stem, and Drilled parts consist of the shifters, the brake levers, the brakes and the chainrings. This bike in great condition is perfectly fit for an Eroica ride or your weekend adventures. Super interesting bike for any serious collector.